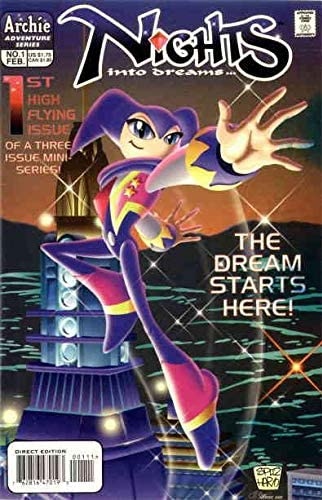 NiGHTS Into Dreams... is a 1998 Archie Comics adaptation of Sega's NiGHTS into Dreams… video game, written by a pre-Marvel Dan Slott. Initially released as a three-issue miniseries, the comic became so popular a second miniseries was made as a sequel to the story. After that the series wrapped up, though it wasn't the end of Archie and NiGHTS' involvement, as the Nightopian made an appearance in Sonic the Hedgehog/Mega Man: Worlds Unite.

The first series adapts the overall plot of the game it was based on, with a healthy dose of Adaptation Expansion focusing on Elliot and Claris's lives in the waking world, including a subplot where Elliot's basketball rival, Roger, falls in with the evil Wizeman and Reala. The second series, written by Karl Bollers, strayed from the game adaptation formula and focused on Elliot and Claris bringing NiGHTS into the real world, while with Wizeman's defeat, Reala took over as lord of nightmares and was eager for revenge.