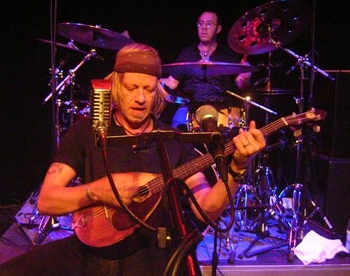 David Eugene Edwards and Ordy Garrison.
I am nothing without His ghost within...
— "The Good Hand"
Advertisement:

The Spiritual Successor of the renowned goth-country band 16 Horsepower.

Back in the early 00's, as the members of 16HP started drifting apart, primary songwriter David Eugene Edwards continued writing and recording music by himself because he had no other means of putting food on the table. 16HP's last years had seen the band shifting from country-rock to more of a dark folk sound; DEE's new music project, dubbed Woven Hand, continued this shift, and carried the music into even stranger territories, drawing influence from Post-Rock, Industrial, Native American percussion, and Medieval European songwriting.

The early Woven Hand albums were essentially solo affairs, with David Eugene Edwards providing vocals, guitar, banjolonote a hybrid instrument: the neck and strings of a banjo on the body of a mandolin, bass, drums, keyboards, hurdy-gurdy, and bandoneon with a minimum of guest musicians. However, Woven Hand has since grown to become a full band, currently consisting of DEE, Ordy Garrison on drums, Charles French on guitar, and Neil Keener on bass.

Also of note is that Wim Vandekeybus, head of the Ultima Vez Dance Co. in Belgium, is a friend of David Eugene Edwards and has commissioned soundtracks by Woven Hand for two productions: Blush and Puur.