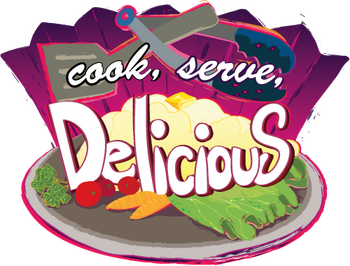 The titular restaurant was once a thriving source of fantastic food, but then it declined in popularity, and fell into disrepair. You, the player, have inherited the restaurant, and have to complete a set of objectives to hopefully raise the restaurant up through the star ratings. Orders are served by completing various timing and keyboard-based minigames as quickly as possible, while also having to contend with various chores such as rat traps, increased litter, dirty plates and the toilet. On top of this, you're also getting attention from the host of a cookery-based TV show, along with regular supplies of mysterious golden tickets. Only by progressing through the star ratings can this become clear to the player.

After becoming a surprise hit on its release, a sequel, Cook, Serve, Delicious! 2!!, was announced in July 2015

and subsequently released on September 13, 2017. A third game called Cook, Serve, Delicious! 3?! was announced in August 2019

A new title in the series called Cook Serve Forever

was announced in 2022. The game follows the story of aspiring chef Nori Kaga and her journey to rise to the top of the culinary world.

RUSH HOUR! The dawn of a new era of tropes is at hand: