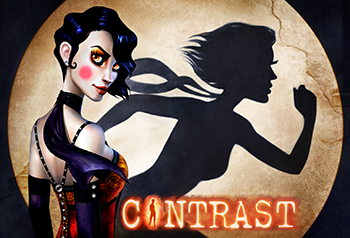 Dawn and her shadow form.
Advertisement:

Contrast is a Puzzle Platformer, developed by Compulsion Games. Set in a 1920s styled, jazz themed world, players take the role of Dawn, a mysterious invisible woman who has the power to become a shadow on the wall, and use the shadows as platforms. Only Didi, a young girl whom Dawn aids and protects, can see her.

Together they unravel the secrets of Didi's family: her mother, Kat, a rising star lounge singer and Kat's ex-husband Johnny, a con man in debt to the wrong people.

The game was initially released on November 15, 2013, for PlayStation 4, Xbox 360 and PC, with the PlayStation 3 release following on November 19. The game was also ported onto Xbox One on June 26, 2014. Pre-orders came with a theatre-style "programme" featuring a cast of characters, concept art and behind the scenes notes.