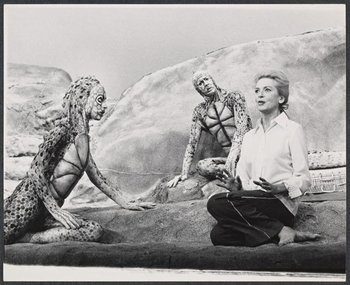 Seascape is a 1975 play by Edward Albee.

Charlie and Nancy are a long-married couple on the verge of retirement, enjoying an afternoon on the beach. Nancy hits upon the idea of becoming nomads after they retire, moving around from beach to beach all over the world. Charlie, who is more set in his ways and more content to grow old in some Arizona retirement community or the like, dismisses this idea out of hand. This sets off an argument in which Charlie says he likes things the way they are, while Nancy says that she needs more challenges in her golden years. An increasingly irritated Nancy says that she once thought about cheating on Charlie years ago, when he seemed to lose interest in her sexually for a time.

Then the lizard people show up.

No, really. The rather ordinary argument between two old folks is interrupted by two lizard people who crawl up out of the ocean and meet Charlie and Nancy on the beach. The funny thing is that Leslie and Sarah, the lizard couple, are a lot like Charlie and Nancy, an old married couple with their own quirks and concerns. Although Leslie and Sarah speak English, they are unfamiliar with concepts like birds, and they cower with fright whenever an airplane zooms over the beach (the beach appears to be under a common flight path). Sparks fly as the four married people confront each other.

The original 1975 production featured Deborah Kerr as Nancy and Frank Langella as Leslie.