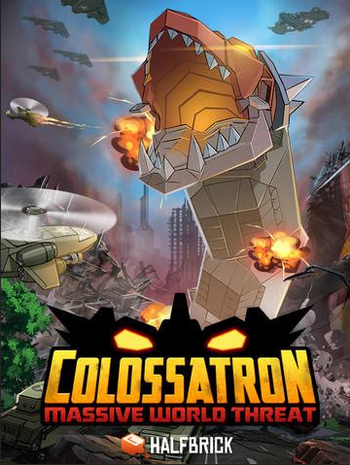 Rick Dalton: Katie, can you hear me!? What's the situation?
Katie Hazard: Looks like the General needs a new plan!
General Mustache: LAUNCH THE DOOM JET!

Colossatron: Massive World Threat is a 2013 game for iOS and Android, developed by Halfbrick Studios.

A planet not quite like ours is beset by a gigantic (or indeed, colossal) mechanized battle-platform snake Kaiju from outer space carving a path of destruction through the cities and nations of the world. The world's military forces throw everything they can muster at the "Massive World Threat", led by the bombastic General Mustache.

Perhaps surprisingly, the player sides with Colossatron's rampage and more unexpectedly doesn't direct it themselves. Colossatron roams about as it wills (though it can be directed to strike at a target) while the player gathers primary-coloured "power cores" falling from space with the monster to build Colossatron's body. Three cores of the same colour will combine into a bigger core, better armed and armoured (but a more concentrated target), while two different cores become a secondary-colour core with a second-tier weapon. (And three of those combine, too.)

And so Colossatron (and you) rampage through the world, breathlessly described by the Framing Device of Action News 6 reports from slick studio anchor Rick Dalton and field reporter Katie Hazard, with emphatic input from General Mustache.

The following tropes are exhibited in Colossatron: Massive World Threat: