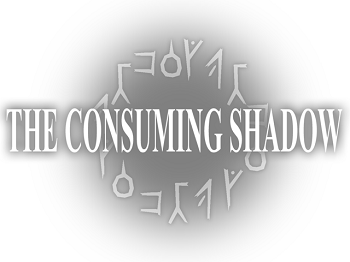 "Try not to go mad and shoot yourself. This is important."
— Official Webpage
Advertisement:

The Consuming Shadow is a Lovecraftian Roguelike by Ben "Yahtzee" Croshaw, inspired by Eternal Darkness, FTL: Faster Than Light, and the board game Arkham Horror. The game was released in July 2015, and is currently available through Yahtzee's website

or the Humble Store

A shadow is trying to enter our world. One of the Ancients. Its presence is felt all over the country as its looming shade slowly twists, perverts, and poisons the minds of men, and turns the towns it touches into festering breeding grounds for its horrifying minions. It will arrive in three days at Stonehenge where the barrier between the worlds is at its weakest. The good news is that the right ritual will banish it and put a stop to its invasion attempt, the bad news is that you are not sure which of the Ancients is the force behind it all, and performing the wrong ritual will undoubtedly make the already bleak situation much, much worse.

You know what you must do: explore places touched by the Ancients, fight their minions, and assemble enough clues to piece together both the banishment ritual and the identity of the invading god, all while trying to keep your own rapidly deteriorating grasp on reality from slipping too far in the process. But you are not sure how you know all of this. For some reason you can't shake the sensation of deja vu, as if you have done all of this before, over and over and over again...