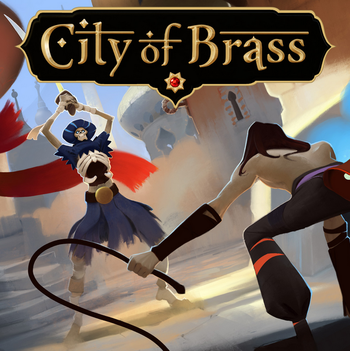 City of Brass is a 3D Roguelike game done in a Hack and Slash style. It was developed by Uppercut Games (a company led by former Bioshock developers), and released on May 4th, 2018 for PC, Playstation 4 and Xbox One, after first spending some time in Steam Early Access. It was also ported onto Nintendo Switch on February 8th, 2019.
Advertisement:

In it, you are simply an explorer, who intends to loot the 12 levels of the titular City of Brass of as much treasure as he can carry. Of course, the city is also filled with a lot of angry undead, many with mystical powers, who have no intention of letting an intruder plunder their place.