Music / The Buddha of Suburbia 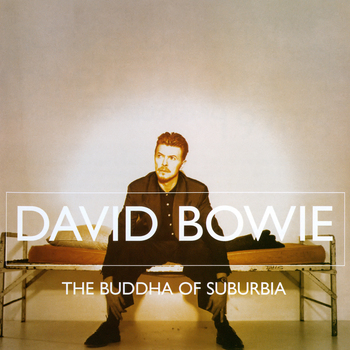 "Now we're swimming up farther with the doll by our sides."
Advertisement:

The Buddha of Suburbia is the nineteenth studio album by David Bowie, released in 1993 (just seven months after Black Tie White Noise). Though named after the 1993 BBC miniseries of the same name (itself based on the novel by Hanif Kureishi), it is not a soundtrack for it. Rather, it serves as an artistic expansion of the musical and lyrical themes featured in said soundtrack, built off of demo recordings that Bowie had initially made for the show but withdrew. Revisiting the material with Turkish multi-instrumentalist Erdal Kızılçay and producer David Richards (both of whom had previously worked with Bowie for the title single to When the Wind Blows and on Never Let Me Down), Bowie elaborated upon these recordings to the point where it was adjacent to but unrecognizable from the original soundtrack. The only song shared between the show and album was the Title Track.

Musically, the album is a continuation of the electronic rock style that Bowie had first developed on Black Tie White Noise. However, rather than going for the lounge-pop Contemporary R&B of that album, The Buddha of Suburbua orients it in a musically and lyrically abstract direction more in the vein of the Berlin trilogy 16 years prior, in effect acting as a Spiritual Successor to those albums. Fitting Bowie's choice of collaborators, the idea was one rooted in the period just after Never Let Me Down's release, with Bowie having voiced his desire to make a Berlin Trilogy successor for the late '80s before a bout of Artist Disillusionment motivated him to form Tin Machine instead; Bowie's original demos for the album he promised back then were refitted for other projectsnote "Pretty Pink Rose" and a Cover Version of Bob Dylan's "Like a Rolling Stone" were carried over to solo albums by prior collaborators Adrian Belew and Mick Ronson, respectively, while "Lucy Can't Dance" became a bonus track on the initial CD release of Black Tie White Noise. Concurrently with its sound, The Buddha of Suburbia is also overall more personally introspective, focusing on the BBC miniseries' themes of faith, personal identity, and self-actualization, punctuated by heavy references to South Asian culture and the South Asian diaspora in the United Kingdom.

Despite being radically different from the music featured in the show, Arista Records chose to brand and market The Buddha of Suburbia as the official soundtrack album from the miniseries, right down to using an edited still from the latter as its cover art. Consequently, the album undersold, only reaching No. 87 on the UK Albums chart, not helped by the multitude of releases that the Title Track received as its one and only single. As a result, the album was deleted from Bowie's catalog, and went unreleased in the US until a 1995 release by Virgin Records. It would be quickly deleted there too after further underselling; the album wouldn't return to print until a 2007 by EMI. In spite of its marketing though, Bowie, biographers, and journalists would continue to maintain that it was a proper studio album rather than just a TV soundtrack, a label that would finally be affirmed in 2021, when it was included as part of the Brilliant Adventure (1992-2001) Boxed Set in a vinyl-centric conversion of its 2007 packaging.

All that said, The Buddha of Suburbia was a personal favorite of Bowie, who lamented its commercial underperformance as "a real shame." As a testament to his enjoyment of this album, Bowie would re-record the track "Strangers When We Meet" for his next album, 1. Outside.

This album produced just one single: the title track, which was released in a number of different forms.

"Troping along in south London, vicious but ready to learn":