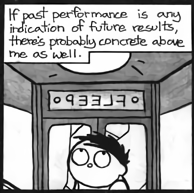 is the story of Jimmy Yee, who enters a phone booth and blacks out. He wakes up to discover that the booth is encased in concrete.

Using nothing but the contents of his pockets, a Pay Phone, and his skills in mathematics, Jimmy must deduce how he got there, and how to escape, before he runs out of air.

This comic strip by Jason Shiga was originally published in the newspaper Asian Week, but was cancelled two-thirds into its run. Shiga has since published the complete story on his website: it can be read here.