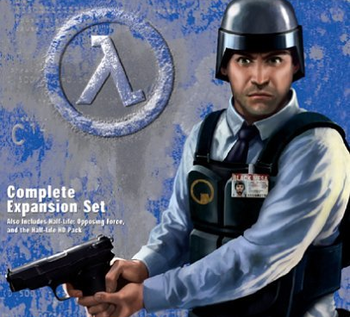 "Shouldn't you be guarding some donuts and coffee right about now?"
—- Black Mesa Scientist
Advertisement:

The player takes control of Barney Calhoun, a security officer briefly seen during the opening of the first game. While making his usual rounds at Black Mesa, the Resonance Cascade teleports an influx of alien creatures into the facility. Using what little equipment he has available, Barney travels through the facility and recruits the help of Dr. Rosenberg, who has a plan to transport the trapped scientists safely out of Black Mesa.

Compared with its predecessor Half-Life: Opposing Force, Blue Shift is considerably stripped back in terms of content, lacking many of the weapons and enemies from the original game and unlike Opposing Force featuring no new enemies or weapons of its own. Blue Shift was the first game in the franchise to have a significant NPC helping the player during the game, and the game came with a free High Definition pack that upgraded the models to the source game. Barney would later go on to become a major supporting character in Half-Life 2.

In March 2021, Black Mesa: Blue Shift, a comprehensive Fan Remake that aims to recreate the entire expansion pack as a mod for Black Mesa, had its first chapter released. As of December 2022, four playable chapters have been published.