Fanfic / The Boy Without a Fairy

How will the hardships of saving a kingdom sculpt and harden a peaceful ten-year-old child? 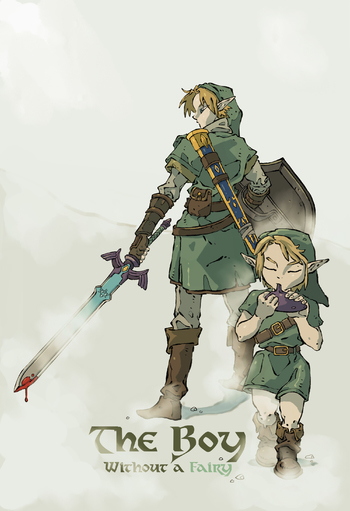 The Boy Without a Fairy

) is a completed novelization of The Legend of Zelda: Ocarina of Time, written by TheLoneStar6 starting in May 2019 and ending in November 2021.

The story is a more realistic retelling of Ocarina of Time that details the detrimental psychological effects a child would have when burdened with saving the world and fighting dangerous monsters at such a young age.

This story has a sister series in Tales of Termina, a series of one-shots detailing Link's adventures in Termina after the events of The Boy Without a Fairy.

As of January 2022, the author has begun a sequel, another adaptation of Majora's Mask, called The Boy in the Mask

, admitting that it will likely borrow heavily from Tales of Termina.

The Boy Without a Fairy contains examples of:

The Boy in the Mask contains examples of: