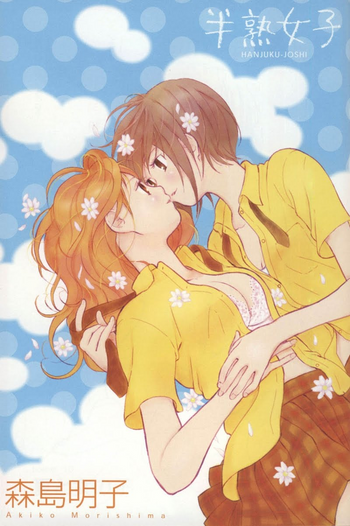 Hanjuku Joshi begins with the readers being introduced to first year highschool student Yae, who is naturally and intuitively feminine, something she despises in herself. We're then introduced to her classmate Chitose, a naturally tomboyish girl whom Yae is both admiring and jealous of.
Advertisement:

Chitose quickly sets her sights on Yae and tries to become close to Yae, even on occasion flirting with her. Chitose eventually wins Yae over and the two become close friends. However, their Unresolved Sexual Tension continues to build and build before finally culminating in a kiss... Both of them are confused by this. What happens next for the pair? Is the love between them real?

A sequel series called Motto Hanjuku Joshi picks up more or less right after the events of the first series; it began serialization in Galette in 2017.