Recap / Game of Thrones S3E7: "The Bear and the Maiden Fair" 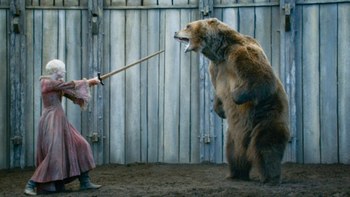 Just South of the Wall, Jon Snow and the Wildlings continue their journey. Jon and Ygritte's conversation shifts towards the differences between Westeros armies and Wildling raiders, and she chides him by mentioning that Wildlings would never be so stupid as to warn their enemies with drums. Jon retorts that Mance's plan to "light the biggest fire the North has ever seen" is so much more subtle. Ygritte irritably says her five favorite words and storms off. Jon and Orell have their own little conversation. Jon is pissed at Orell for trying to Cut the Safety Rope during the climb up the Wall, and Orell is jealous of the non-Wildling for having Ygritte. Orell ominously warns Jon that he won't be able to keep her.

In the Riverlands, the Stark party has been delayed. Catelyn worries that Walder Frey will consider this a slight, as he is "prickly". The Blackfish has a similar opinion of Frey, expressed in a more... soldierly way. Robb brushes their worries aside, pointing out that Edmure Tully is the best match that Freys have ever had. Later that night, after Robb and Talisa do what newlyweds do, the Queen of the North reveals that she's pregnant, to Robb's joy.

Meanwhile, in King's Landing, Sansa is taking her forced wedding to Tyrion about as well as you might expect—she sobs about it to Margaery, going on about how stupid she was to have ever wanted to come here, and so forth. Margaery tries to cheer her up by looking at the bright side: Sansa's children will inherit the North and even Casterly Rock. Sansa, however, is a bit hung up on having to have sex with someone who is both a Lannister and a dwarf. Said dwarf is not much happier as he bitches to Bronn about the wedding. Tyrion's main complaint is that Shae won't like this at all. Bronn's enlightened response to this boils down to yeah, well, fuck Shae. Shae's just a whore, and Tyrion won't get anywhere if he's desperate to make friends.

In the Throne Room, Tywin has been summoned by Joffrey. The King wants reports on the Small Council meetings, despite never showing up to them due to being very busy. Tywin, no doubt drawing on his long experience of not strangling Aerys II, doesn't strangle Joffrey but rather handles him politely yet sternly until Joffrey gets to the main point, Daenerys Targaryen, visibly cowed. In what must be the finest, most farsighted moment of his life, Joffrey wants to know what is being done about her. As he realizes, if the rumors are true, and if she has three dragons, then once they grow up, the "Baratheon" dynasty is fucked. Tywin completely downplays the threat as being both improbable and far off in the future. The King is rendered speechless—and so is the audience as they realize that they agree with Joffrey.

Outside Yunkai, Dany questions her councilors about how to take the city. The whole thing can come down to a siege situation, and Jorah points out that this is trouble they don't need. Dany's hatred for slavery outweighs this, however, and they march. A negotiator offers Dany gold and ships to go away, but her insistence that they free all the slaves gets a "You're mad! We'd like to see you try" response. The negotiator leaves, but not before making a reference to "powerful friends" that Dany wants looked into.

In King's Landing, Shae is pissed over the wedding, and Tyrion is trying to placate her in the traditional Lannister way. It doesn't take. Shae isn't going to let herself be bribed into becoming a high-class whore (again), and Tyrion is never going to elope with her. She storms off in a huff.

Sailing in Blackwater Bay, over and around the Wildfire-blasted hulks of Stannis's fleet, Melisandre is talking with Gendry. She shares with him the story of how she was born into slavery, delivered into freedom by the Lord of Light. Gendry laments his low birth until she reveals to him that he has royal blood in his veins, Robert Baratheon's. Gendry is stunned.

In the Riverlands, Arya is sulking. As far as she is concerned, the Brotherhood Without Banners are all traitors for selling Gendry to Melisandre, in spite of what Beric tells her about the Lord of Light. Arya has no love for that god, and declares that the only god she worships is Death. A messenger comes in to announce that a Lannister party has been spotted to the south. When Beric announces that the Brotherhood will attack them, Arya starts spazzing out, given that they would be moving away from Riverrun. Beric's promises that they'll get her there eventually, that they'll keep her safe, and that she'll understand when she's older mean less than nothing to her, and she flees into the woods, only to be captured by the Hound.

At Harrenhal, Jaime has a last conversation with Brienne. He's leaving for King's Landing, Roose Bolton is leaving for Edmure's wedding, and Brienne is going to be left all alone with Locke. Jaime mentions that he owes her a debt, and Brienne, knowing she's doomed, tells him to pay it by helping the Stark girls. Jaime leaves the next morning, telling Roose to send Robb his regards.

The Boy comes out, and mentions that Theon's "prowess" is well known. At the Boy's order, two men come out to hold Theon down as he draws a wicked-looking knife. Realizing what's going to happen, Theon starts screaming for mercy, but the Boy says they are showing him mercy, as they aren't killing him.

In the North, after a successful hunt, Ygritte mistakes a windmill for a palace and she and Jon start talking about the towers of Winterfell. The conversation shifts and Jon tells Ygritte that he thinks the invasion is doomed. Kings-Beyond-The-Wall have invaded six times and have failed six times. Ygritte thinks Mance Rayder will be different, but Jon reiterates that they'll all die, causing Ygritte to reaffirm that they belong to each other, against the world.

Elsewhere, Osha is jealous of how Jojen always has Bran's attention. Hodor isn't much for conversation, so she marches up to them and demands to know what they're talking about. Her mood doesn't improve when she learns that Bran no longer wants to go to Castle Black. He wants to catch the Three-Eyed Raven, and is going North of the Wall to do it. Osha insults the idea that he may have fallen from the tower for a reason, saying that the Gods couldn't care less about any of them. She goes into her backstory, about how her lover was turned into a wight, and how she's not going back beyond the Wall for any reason. She promised to take him to the Wall, and that's as far as she goes.

Then to outside Harrenhal, where Qyburn is treating Jaime's stump. Asked why he lost his chain, Qyburn responds that he lost it for experimenting on dying patients. Jaime insinuates that he probably experimented on the poor and the weak, causing Qyburn to ask Jaime how many people he's saved. Jaime responds with, "half a million." Qyburn mentions that Brienne's father offered to buy her life for 300 gold pieces, but that Locke won't take it out of spite. He explains to the stunned Jaime that a person like Locke doesn't have a long life expectancy, and is therefore not inclined towards long-term thought. Jaime promptly demands that the captain take him back to Harrenhal, informing the man that he can either tell his father that the captain was the one who chopped off his hand or that he saved Jaime's life. The captain takes the hint, and they get back to Harrenhall just in time to find Brienne in a pit, fighting a bear with a wooden sword. Jaime offers to pay Locke whatever ransom he wants, but Locke refuses 'cause he's a dick, sneering that all these highborn nobles—

Jaime jumps into the bear pit.

His escort puts a crossbow bolt in the bear, buying enough time for him and Brienne to climb out. Jaime and Locke, Round 2, happens as Jaime declares that Brienne's coming to the capital too or they'll just have to kill him. Locke retorts that Brienne is his, Bolton's orders. Jaime responds that Bolton's orders were for him be brought alive to King's Landing, and asks Locke who he thinks Roose wants to piss off less, him or Tywin Lannister? Locke, having no response to that, and seeing that the captain is ready to fight over it, backs down. Jaime, Brienne, and guards all walk out to the tune of "The Rains of Castamere."