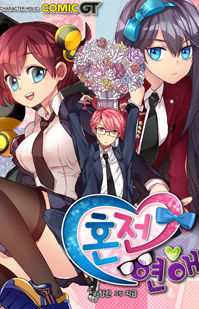 From left to right are the main characters. Park Yua, Han Sang-Hyun and Yu Suh-Eun.
"Han Sang-Hyun" is a boy that dreams to become a manhwaka, and one day he hears a story that falls like lightning from a clear sky. And that is that he had a fiancée he never knew about. After not being able to win against his grandfather, he goes to the meeting against his will; however the lady he meets seems to be a rich, spoiled girl named "Yu Suh-Eun". After having a fight her, he comes back to his house just to find out that Yu Suh-Eun there?! What? The new house that they'll be staying in is the "Marriage House"? Will Han Sang-Hyun and Yu Suh-Eun break through their families' plans and successfully get divorced!? Not safe for work due to the underlying themes, as opposed to actual content.