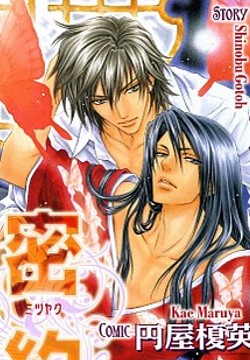 Yuuichi: "Lover to paramour, huh? A drop in the ranks, I guess."
Iori: "You haven't risen or dropped. I have always, always loved you...since the day we met and now. I'll sacrifice anything."
Advertisement:

A one-volume Yaoi Genre manga by writer Gotoh Shinobu and artist Maruya Kae. Yuuichi was orphaned at a young age, with his only family connection being his strange uncle Kyuusai who is famous for writing mystery stories. The story begins when his relationship with his childhood friend Iori is challenged when he finds out Iori, the Hanayashiki heir, is marrying into the Yonekura family to restore the family's fortunes. Though Iori assures Yuuichi that he will always love him, Yuuichi privately doubts he'll ever be allowed to meet Iori again.

The marriage day gets quickly overshadowed by a series of strange incidents related to Yuuichi's Recurring Dreams. The final wedge is driven between the lovers with Kyuusai's revelations of Yuuichi's real heritage and nature, which suggests their love is not what it seems, with only one of them destined to survive it.

The Secret Agreement provides examples of: