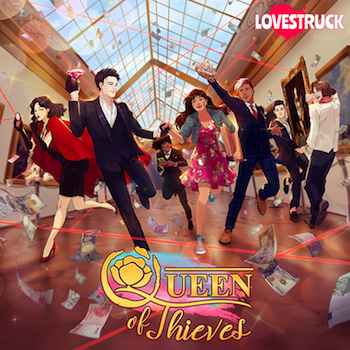 Queen of Thieves is a Romance Game Visual Novel by Voltage Entertainment USA, released through their Lovestruck app for iOS and Android devices. Featuring art by Irene Koh, it debuted in March 2019.
Advertisement:

The heroine is a struggling art school graduate hoping to make her big break before she has to return to her hometown in defeat and get a "real job." When the break she was hoping for comes, it's not what she expected: through a series of apparently chance encounters she ends up swept up into the Gilded Poppy, a team of infamous thieves.

The Gilded Poppy steal only the rarest of the rare, and they've chosen the heroine to play a part in their latest heist. All of her skills and talents will be tested to the fullest as she dives headfirst into a world of con games, daring escapes, and thrilling romance with one of her new teammates.