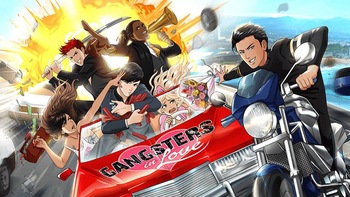 Gangsters in Love is a Visual Novel Romance Game for iOS and Android by Voltage Entertainment USA.

A young woman is housesitting for her parents in Los Angeles when a gang breaks in and begins overturning the place, looking for the owners. She's saved by the timely intervention of a rival gang, who take her away to their mansion. They, too, claim to have business with her parents. Under their watchful eyes, she tries to learn the truth about her parents and just what sort of situation she's ended up in.

The five members of the gang and potential Love Interests are: Chance, the leader; Yoshimitsu, the sword-wielding Yakuza; Irving, the celebrity lawyer; Ash, the quiet hitman; and Aurora, the gang's hustler. Later, an additional love interest was added, the federal agent Mateo Estrada. In 2017 the original app was discontinued and the title incorporated into Voltage USA's Lovestruck app.