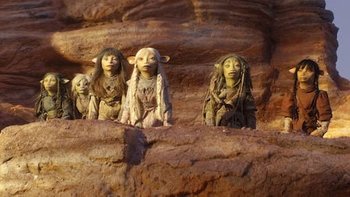 skekVar and skekZok are impeded by Rian's group while en route to the Castle, losing their prisoners when Lore catches up to their carriage. Rian convinces the Paladins to spread the word of the Skeksis' misdeeds. The Crystal Guard stages a rebellion that is swiftly put down: they are defeated and drained, with Tavra among the captured. The Skeksis decide to attack Stone-in-the-Wood after an astonished skekSil returns and reveals that the Stonewood clan have turned on them. urVa learns from Aughra that his destiny is to confront skekMal, whose defeat requires a sacrifice. In Ha'rar after sending the Living Crown pieces to the other Maudras to gather for her coronation and cremating her mother for "treason", Seladon finds herself challenged by Fara for the All-Maudra title. Seladon responds by renouncing the Crown and donning Skeksis-inspired regalia while declaring herself All-Maudra by the Skeksis' will. At the Crystal Sea after a night of mourning, Rian's group are met by a Dousan clansman named Rek'yr who takes Rian, Deet, Brea, and Hup to the Circle of the Suns while the others leave to rally their clans.