Recap / The Dark Crystal Age of Resistance S1E5: "She Knows All The Secrets" 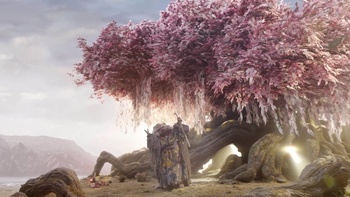 skekSil convinces skekMal to let him take Rian back to the Castle, consuming the vial's contents before smashing it, only for Rian to be saved by Naia and a freed Gurjin while Tavra remains in the Castle. In Ha'rar, skekVar and skekZok gather seven volunteers under the guise of recruits for a new Arathim rebellion. The All-Maudra is convinced by Brea to meet Lore, while Seladon encounters Hup and a disguised Deet who have infiltrated the Citadel. At the Sanctuary Tree, Aughra eventually realizes that she must listen to Thra to hear its song again and succeeds, with Rian's group, All-Maudra Mayrin, Brea, Deet and Seladon all ending up in the Dream Space while dreamfasting. While forced to send Seladon back to the physical world due to her blind faith in the Skeksis, Aughra reveals their actions against Thra and rallies the gathered Gelflings to stop them. The All-Maudra confronts the Skeksis and is killed by skekVar, with a bereaved Seladon allowing the Skeksis to take the "traitors" away as her first decree as the new All-Maudra.