Recap / The Dark Crystal Age of Resistance S1E7: "Time To Make My Move" 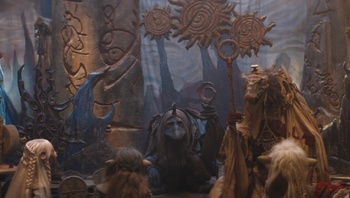 Rian, Brea, Deet, Hup and Lore reach the Circle of the Suns where they're surprised to meet a benevolent Skeksis, skekGra the Heretic, as well as his Mystic counterpart, urGoh the Wanderer. skekGra and urGoh put on an opera then a puppet show for the group, in which they gradually reveal their races' origins as the splintered urSkeks, with the Darkening being a byproduct of the Crystal's corruption. They announce their desire to merge back into their unified form GraGoh and need the Gelflings' help in using the Dual Glaive (a legendary sword) to end the Skeksis' rule — that desire got them banished by their brethren in the first place. As Rian's group set out to the Caves of Grot where the Dual Glaive is located, they are ambushed by skekMal the Hunter, who escapes with Brea after being mortally wounded by his Mystic counterpart urVa the Archer. Meanwhile, keeping secret the fact that the Caves have been compromised by the Darkening, skekSo wins the Arathim Ascendancy's services by giving them back their ancestral home if they help put down the Stonewood Gelflings. The Ascendancy request Tavra as a host for their mind-controlling Arathim, which take over the Stonewood clan as they are preparing for battle and have them march to the Castle.