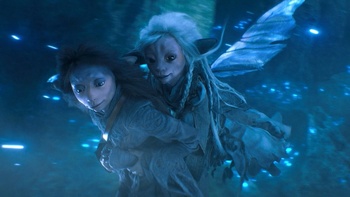 Rian and Deet travel through the Breath of Thra, thermal vents from the planet's core, to quickly reach the Caves of Grot to find the Dual Glaive, but find the caves taken over by the Arathim with Deet's family and Maudra Argot among those under their control. Upon learning the Arathim are being attacked by the Nurlocs who went berserk due to the Darkening and revealing the Skeksis tricked them, Rian and Deet convince the Ascendancy to join them against the Skeksis while getting them and Deet's family to the surface. In its last act, the Sanctuary Tree gives Deet the power to extract the Darkening from others. Meanwhile after ignoring Aughra's attempt to reason with her, Seladon travels to the Castle to beseech the Skesis for mercy to the Stonewood. But she instead learns the truth from Skesis themselves and is captured as a mortally-wounded skekMal returns to the Castle with Brea. The Skesis panic as skekSo orders for skekMal's life to be saved at any cost, and Aughra states that she now knows what she must do.