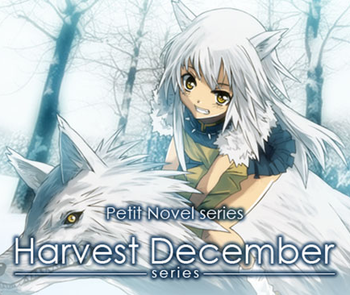 Harvest December is a series of Visual Novels that has a different story take place each month over the course of one year. Two months before the start of the first story, city boy Masaki Konno moves to a small town in the Tagami prefecture. Within moments of arrival, the local god, Shiro, commands him to be her husband and he accepts. On the first day of school, local rich girl Yuki Towada asks him to be her boyfriend and he accepts. They both find out and Hilarity Ensues from there.

While the Love Triangle between Masaki, Shiro, and Yuki is an issue that covers the over-arching plot of the entire series, individual stories per month will focus on an individual within Masaki's circle of friends and the situation they find themselves in for that brief period of time, contributing to the overall story and everyone's individual Character Development.

The petite novels were originally released one at a time for PC over the course of 2007 but the entire series became available in a complete package for the Nintendo 3DS near the end of 2015 as Petit Novel Series: Harvest December.

There is also a manga adaptation of the first chapter/episode.

Please insert character-related tropes into the Character Sheet. If a particular example is limited to a single chapter, insert that within the appropriate recap page.

Harvest December as a whole includes examples of the following: