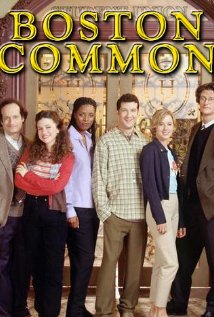 "Hey, Boston!/Ooh, I can hardly believe it/Oh, but now, I know I can see this is/My place to go/And now I know/I'm home/I'm home!/Thank you, Boston!"
—The lyrics to Boston Common's theme song, as sung by Danny Timms
Advertisement:

Boston Common was a short-lived sitcom that aired on NBC from March 21, 1996 to April 27, 1997. Created by David Kohan and Max Mutchnick, in what was their last big project before the much-more successful Will & Grace, the series centered around Boyd Pritchett, a young handyman from rural Virginia, as he moved his younger sister, Wyleen, to Boston, so she could start her life as a student at the fictional Randolph Harrington College. Boyd was only supposed to stay a few days to help Wyleen get settled in before returning home, only to end up falling in love with attractive graduate student Joy Byrnes, and getting a job as a maintenance worker at the university. Joy, though, was attached to snooty professor Jack Reed. Living in the apartment across the hall from Boyd and Wyleen was the pretty much always down Leonard Prince, and working with Boyd at the front desk in the student union was the sassy Tasha King, the student union supervisor.

Virginia-born comedian Anthony Clark played Boyd, with Hedy Burress playing Wyleen, Traylor Howard as Joy, Steve Paymer as Leonard, Tasha Smith as, well, Tasha, and, except for the pilot episode, Vincent Ventresca as Jack. In the pilot, the role of Jack Reed was played by Patrick Fabian. Sam Anderson played university president Wesley Butterfield until near the halfway point of season two. At the two-thirds mark of the second season, Tony Award-winning Welshman Roger Rees joined the cast as Butterfield's replacement, uppity Harrison Cross, and the role of university president became more prominent in the show, as Boyd and Cross began to clash on just about everything.

In addition to the principals and supporters, recurring roles were played by actors and actresses that already were or had not yet become well-known. In season two, Margot Kidder was cast as Cookie, the head of the university's theater department and Wyleen's drama teacher, while Zach Galifianakis, in his first television role, was cast as stoner student Bobby.

The series's first season aired in two parts, with the first six episodes airing on Thursdays as part of NBC's "Must See TV" block from March 21 to April 25, 1996, and the remaining four episodes airing on Sundays (August 11, 18, September 8, and 15) after the Summer Olympics in Atlanta. For its second season, the show was placed in the 8:30 PM Eastern time slot on Sundays, paired with 3rd Rock from the Sun. The second season began on September 29, two weeks after the first season ended.

Ratings for the series premiere were strong, as Boston Common finished third on the night, with its lead-in, Friends, finishing first with a new episode, and the show that followed it, Seinfeld, finishing second with a rerun. The show won its 8:30 Eastern time slot over Fox's Martin, CBS's coverage of the NCAA Men's Basketball Tournament, and ABC's coverage of the World Figure Skating Championships. In its first six episodes, Boston Common finished no lower than seventh in the ratings on Thursdays. It ranked eighth overall in the ratings for the 1995-96 television season for all series, between Home Improvement and 60 Minutes.

For season two, however, ratings plummeted. Boston Common finished 51st in the overall ratings for 1996-97, two positions ahead of, of all shows, The Simpsons, but 23 spots below its Third Rock lead-in, leading to the show's cancellation.

After its cancellation, Boston Common aired in reruns on USA Network's "USAM" block, alongside other cancelled NBC sitcoms, such as Something So Right, The Naked Truth, Working, and another much more successful NBC sitcom from The '90s, Wings.

, though some of them are numbered out of order.