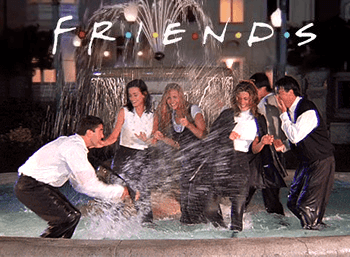 Totally not staged for the opening credits.

You might never see them all in one place during the show itself. They move in their own circles and follow separate storylines. Yet there they are every week, all these people that are somehow connected to each other, standing there self-consciously with fixed grins and arms around each others' shoulders for a big gang portrait, like they're at a family reunion and someone broke out the video cameras. Are we looking at the actors, or the characters? It's kind of hard to tell.

If they're not just standing there, they're on the move, walking together like a chorus line, and that blurs things even more. They're all dressed and made up like their characters on the show, but why would they be all walking together, and so purposefully? It feels like the camera has caught the actors heading for the set at the top of the shooting day. If it's particularly heroic, it's a Power Walk, but it might just be the cast walking together in a tight group in exactly the sort of fashion you'd never see them do on the show itself.

What's perhaps strangest about this trope is that, whereas the Title Sequence is most often compiled by raiding your own show for clips, these awkward group portrait or kick-line moments usually have to be filmed specially, on purpose. The other big problem here is that if the cast changes, you have to reshoot the cast party with the new cast, sometimes over and over again—perhaps unpleasantly drawing attention to missing faces and unloved interlopers.

To fully qualify for this trope, the credits cast party needs to show the cast artificially grouped together for the camera, essentially breaking the Fourth Wall, rather than just interacting as they would on the show. Bonus points for getting all the cast together even if some of them would never be together in the show.

Compare Covers Always Lie, when it's only the cover art that does this.