Recap / My Little Pony: Friendship Is Magic S6 E17 "The Times They Are a Changeling" 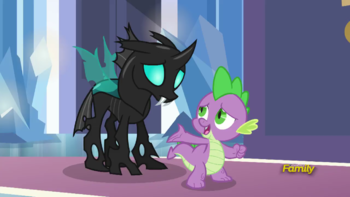 On a trip to visit Flurry Heart and Sunburst in the Crystal Empire, Twilight Sparkle and Starlight Glimmer are amused to see Spike dressed up in a disguise. He doesn't want to be mobbed in the streets like last time, so he's trying to conceal his identity. However, when the three of them arrive, they find the town empty. Spike removes the disguise, and is immediately mobbed by crystal pony fans. They seem suspicious of Twilight and Starlight, and think that Spike might not be the real Spike, dropping him and fleeing. Confused, the three are also stopped at the castle by crystal pony guards, Shining Armor, and Princess Cadance. A changeling has been reported in the area, and since they can look like anyone, they can't take chances. After doing her old dance with Cadance to prove her identity, Twilight and Starlight are allowed to pass, while Spike is asked to go look for the changeling with the guards.

Out in the snow fields, Spike separates from the guards and falls down a cavern into an ice cave. There, he finds the changeling, hiding. Spike backs away in fear and falls down a crevice, but the changeling saves him. The changeling introduces himself as Thorax, and that he doesn't want to hurt anypony. During the attack on Canterlot, Thorax saw the friendship displayed by the Mane Six, and wanted that for himself, but couldn't get it. He's in the Crystal Empire because of Flurry Heart, and her Crystalling has filled the Empire with more love than ever, and that he's starving for love, but he can't expose himself out of fear of reprisal. Spike tells Thorax that he'll try to explain things, and heads back to the Crystal Empire.

When Spike tries to tell the guards what he saw, they all laugh, and Shining Armor outright refuses to believe that a changeling can be good. Though disappointed, Spike manages to sneak Thorax into the Empire as "Crystal Hoof," a crystal pony. Thorax manages to make decent progress as a friend of Spike's, even getting to meet Cadance and Flurry Heart. However, being so close to Flurry Heart sends Thorax's instincts out of control, causing him to hiss and revert to his normal form. Thorax tries to apologize, but nopony will listen. Sunburst says that Thorax impersonated Spike's friend to get close to the baby, then asks if there's any other explanation. Spike, conflicted, replies that he doesn't know. Heartbroken at Spike's betrayal, Thorax flees the Crystal Empire.

Though the Empire is on high alert, Spike fells guilty about what he said, and goes back to the cavern where he first met Thorax. Spike is surprised by Thorax, who is furious about what Spike said, and wants nothing to do with him. Spike apologizes, saying he should have stood up for Thorax in the first place, before falling again down the crevice. Thorax saves him again, realizing why Spike might have said the things he said. Still, Spike wants to make it up to Thorax. The two sneak back into the throne room, where Spike defends Thorax, saying that he made a mistake, and that Thorax honestly wants a chance to be good. After a moment, Twilight says that she's proud of Spike for being willing to throw away his celebrity status in the Crystal Empire if it meant sticking up for his friend. Moved by Spike's words and Twilight's speech and acceptance of Thorax, Shining Armor and Cadance say that they'll give him a chance, and Thorax is welcomed by the crystal ponies. As the ponies celebrate Thorax's coming and kindness, Starlight agrees with Twilight that friendship lessons can happen anywhere.