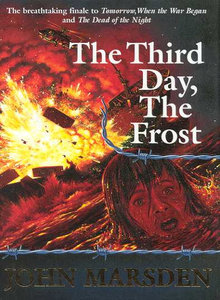 The breathtaking finale... until Trilogy Creep kicked in.
Advertisement:

The Tomorrow Series was a series of books aimed at young adults by Australian author John Marsden. They are written from the perspective of rural teenager Ellie Linton. She and a small group of friends head into an unexplored area of bush for a week-long holiday, and return to find that their houses are abandoned and their animals are dead or dying. They soon realise that Australia was invaded on Commemoration Day, and they are among the very small number of people who have avoided being taken prisoner.

The original series is usually refered to as The Tomorrow Series and consisted of seven books published between 1994 and 1999. These are:

The Ellie Chronicles was a follow-up series, set in the aftermath of the invasion and subsequent war, which began publication in 2003 and finished in 2006. The titles in this series are:

A movie adaption called Tomorrow: When the War Began premiered on August 8, 2010, and got a wide release in Australia on September 2, 2010. Available in the United States on home media. The trailer is up here.

It also got a Live-Action Television adaption also called Tomorrow: When the War Began but unreleated to the the film that premiered on ABC 3 in 2016.

By the way, this series is totally not Red Dawn in the outback. Honest.

The Ellie Chronicles contains examples of: