Music / Whatever People Say I Am, That's What I'm Not 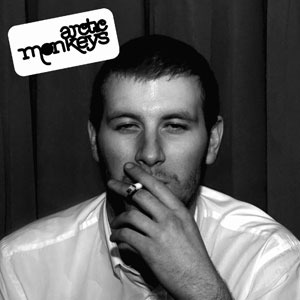 "And what a scummy man/Just give him half a chance, I bet he'll rob ya if he can..." note This guy isn't a band member; he's a friend of Alex Turner's, named Chris McClure
Advertisement:

Whatever People Say I Am, That's What I'm Not is the first studio album by the Indie Rock band Arctic Monkeys. It was released in 2006, to near-universal acclaim, and it became the fastest-selling debut album ever by any band in the history of the UKnote Since surpassed by Leona Lewis's Spirit and Susan Boyle's I Dreamed A Dream. It has since gone quintuple platinum and quickly established the Monkeys as a mainstream Indie act, though the band more or less eschewed this label with their constant experimentation on later albums such as Humbug and Suck It and See.

Its massive success stems from the fact that their demo album was leaked onto the Internet in 2003 (called Beneath the Boardwalk) and the fans subsequently began widespread file-sharing on websites such as MySpace. The songs "I Bet You Look Good on the Dancefloor" and "When the Sun Goes Down" were both released prior to the album, and both hit number one on the UK Singles chart. The band thus became one of the first to emerge through Internet popularity, and the album became a landmark in the Turn of the Millennium since they won a widespread audience of millennials in a way almost no other band had done before.

"When the Sun Goes Down" EP
"I Bet You Look Good on the Dancefloor" EP
Advertisement:
"Leave Before the Lights Come On" EP
"Who the Fuck Are Arctic Monkeys?" EP

"Whatever People Say I Trope, That's What I'm Not":

Alternative Title(s): Whatever People Say I Am Thats What I Am Not