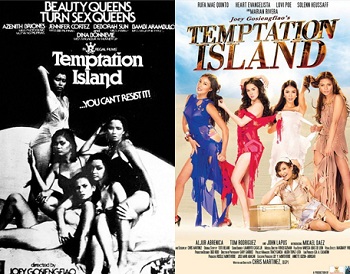 "What do you expect me to do? Resist all temptations on this island?"
Advertisement:

The search for a new Miss Manila Sunshine is on. Prizes include a trip to California, a house and lot, a brand new car and a substantial amount of money. Four lovely young ladies from all walks of life join, and are chosen as finalists. Suzanne (Jennifer Cortez)/Serafina (Lovi Poe) is a bored heiress who wants to get out of the country for the summer. The overprotected Dina (Dina Bonnevie)/Virginia (Heart Evangelista) hates depending on her brother for rides, and wants a car of her own. Bambi (Bambi Arambulo)/Pura (Solenn Heussaff) is a beauty pageant veteran who has fallen on hard times from her frivolous parties. Azenith (Azenith Briones)/Cristina (Marian Rivera) is a con artist who aims for the house and lot, and plans to seduce the judges with the help of her boyfriend.

But a fire breaks out and sinks the yacht! These people then jumped overboard and washed up together on a barren desert island, forced to tolerate hunger, heat, thirst, lust... and each other.

Temptation Island (1980) is considered as director Joey Gosiengfiao's masterpiece. It has been considered the crown jewel of Camp, and the Bible of witticisms to a generation of Filipino cineastes. It was adapted for the stage with gay actors playing the beauty contestants. A faithful 2011 update was helmed by Chris Martinez and became a box-office hit.

Not to be confused with the Reality TV show.