Video Game / Secret of the Stars 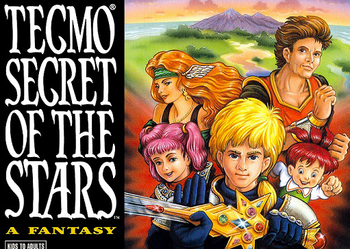 In 1993, Tecmo decided to try their hand at the whole RPG thing. The result was Secret of the Stars, a Dragon Quest clone with a by-the-numbers plotline.
Advertisement:

Ray, a young blond boy growing up on a tiny island, learns that he's actually an Aqutallion, one of the warriors destined to defeat the evil Homncruse. After his Beloved Peasant Village goes boom, he sets out to find the other four chosen warriors: Tina, Cody, Leona, and Dan. They then must pass a series of tests to prove their worth as Aqutallion Warriors, unlock their true potential, and gain the strength to defeat Homncruse and his four generals.

Aside from the five chosen children, there are eleven adult heroes known as the Kustera who form their own, separate team. The Kustera are basically a secondary team, with a few areas that only they can enter (just as how there are areas only the Aqutallion can pass). There's also a village that Ray establishes as a new Hometown right after losing the first one, for all the Heartwarming Orphans and his friends and allies to stay at in their spare time.