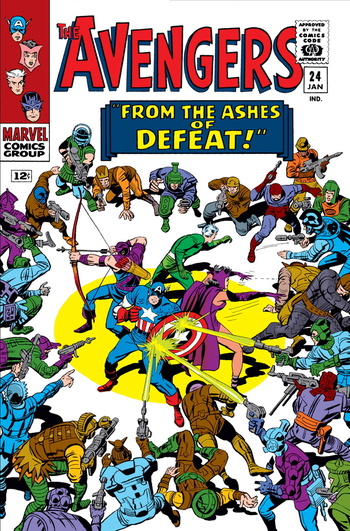 The Avengers and some fans...
The second Avengers team, usually named "Cap's Kooky Quartet", was created in Avengers #16 by Stan Lee and Jack Kirby, with most of the subsequent issues written by Lee and drawn by Don Heck. Stan Lee wanted to get rid of the similarity with the Justice League, and removed Thor, Iron Man, Giant Man and the Wasp from the team, all of them with their own comic books, and replaced them with Hawkeye, Quicksilver and the Scarlet Witch. Captain America stayed, hence this incarnation became known as "Cap's Kooky Quartet". They had minor powers in comparisonnote This was long before the Scarlet Witch's powers were upgraded into altering reality, and the three new members were former super villains: Hawkeye from Iron Man, and the twins from the X-Men.
Advertisement:

This run also introduces Jarvis, the Swordsman, the first Power Man (Erik Josten, who would later become known as Atlas; not Luke Cage) and Kang's lover Ravonna, among others.