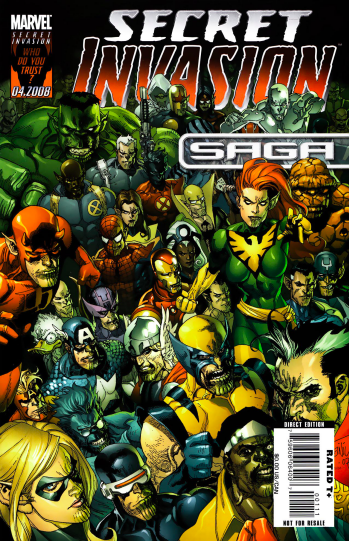 The shapeshifting, superpowered alien race has been posing as our friends. Uh oh.
"Who Do You Trust?"
Advertisement:

In the wake of the Civil War, the New Avengers confront the assassin Elektra. But when Elektra is killed in battle, her body turns green revealing her as a shapeshifting alien Skrull. Turns out the Skrulls had perfected a technique that lets them impersonate anyone, undetectable even to telepathy, super senses, and anything else the superheroes can come up with. The Avengers' (and fans') reaction? Oh, Crap!.

A Marvel Comics Crisis Crossover for the year 2008, about an invasion of the Skrulls on Earth. It's the conclusion of plot elements introduced by Brian Michael Bendis in multiple Avengers titles since the end of the Civil War crossover. It was followed by the Dark Reign and War of Kings events.

The story involves The Skrulls, an alien race of shapeshifters who have (mostly) played a villainous role in the Marvel Universe. After series of disasters, the Skrull Empire is greatly weakened, and a religious figure, Queen Veranke, convinces them that their destiny is to rule the Earth. With help from an extraordinary Skrull scientist, a process is created that allows the Skrulls to fool all known means of detection- only upon their deaths do they revert to their true form. Over a period of several years, they secretly replace several Marvel characters, with Veranke herself taking the place of Spider-Woman. These Sleeper Agents have even been brainwashed into believing themselves to be the replaced person, until a code phrase ("He Loves You" a reference to the Skrulls' god) awakens their true memories. In addition, the Skrulls have figured out how to duplicate the powers of many of Earth's heroes, and even prepared some agents with multiple powers. As the story begins, the awakened Skrull agents begin undermining the hero groups and organizations capable of defeating them, then invade in force...

A live-action Disney+ series based on this storyline was announced for the Marvel Cinematic Universe in December 2020, with Samuel L. Jackson and Ben Mendelsohn set to reprise their roles as Nick Fury and Talos. The series will also have Kingsley Ben-Adir, Olivia Colman, Emilia Clarke, Killian Scott, Christopher McDonald, and Carmen Ejogo in undisclosed roles.