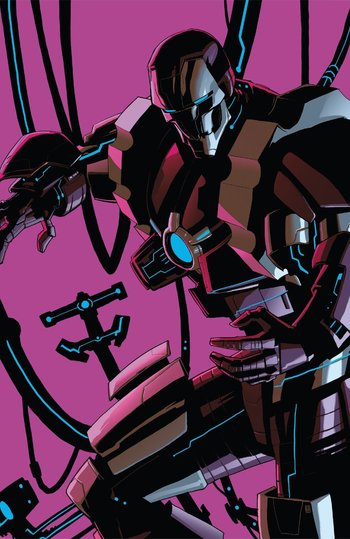 This is the year I save all life on Earth, AND NOTHING WILL STAND IN MY WAY!
Advertisement:

Named after the 1980’s comic of the same name, it also stars an Iron Man named Arno Stark. Except here, Arno has usurped his adopted brother, Tony Stark. After "Tony Stark" has been revealed as an artificial being, he’s been de-legitimized as a person by his own brother, who has appropriated everything from his business to his rebuilt fortune, his home and even his identity as Iron Man.

This is all in Arno's quest to save the world, which he declares to the world on New Year's Day 2020. Specifically, everything he's done is to combat a great threat coming from space, which requires that he unify organic and A.I. life. However, the now supposed A.I. of "Tony Stark" isn't going to go quietly into the night.

The event serves as the Grand Finale to Slott's Iron Man run, after which a new Iron Man series launched... in the year 2020. For convenience's sake, this wiki calls that series Iron Man (2020, Ongoing) to differentiate it from this event.