Recap / The Simpsons S2 E13 "Homer vs. Lisa and the 8th Commandment" 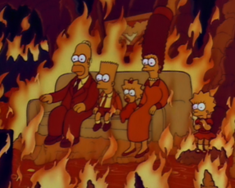 Homer gets an illegal cable hook-up, which causes Lisa to worry for her father's soul, as she learned about the 8th Commandment in Sunday school ("Thou shalt not steal") and begins seeing theft everywhere she looks.