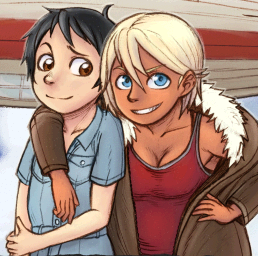 Mina (left) and Erin. In this page image Mina looks a lot more relaxed and confident than she does for most of the story, at least so far.
Alien Hand Syndrome is an animesque Web Comic by Drake, aka Knullakuk

on DeviantArt. According to the official description, "This is a comic about two girls being recruited by an organization that deals with supernatural incidents." As of mid-2017 this recruitment has not yet taken place, although there have been hints as to future developments.
Advertisement:

The story takes place in a parallel world where airships are the main form of international travel. Mina is a shy, reserved high school student and comic book fan in Prussia (a more or less generically western country based on modern Germany). She is surprised when her new friend, the upbeat and outgoing (and rich) Erin, invites her to visit her homeland of Amaria (which has obvious similarities to Japan, although many Amarians seem to have light hair). Despite her initial reluctance she is finally persuaded to go.

Arriving at Erin's mother's hotel, they encounter a couple of mysterious strangers (later named Dan and Nick) and briefly examine a stone that may or may not have magic powers. Shortly afterward Mina has a disturbing vision which makes her wonder if she's going mad, and her reaction to it makes Erin think she's even more withdrawn than ever. Mina subsequently has a number of increasingly disturbing out-of-character moments which Nick insists are connected to the stone, although Erin is convinced they have a more "rational" explanation. At the same time, Mina is becoming increasingly aware that Erin is attracted to her, and Mina isn't sure how she feels about that.

The AHS site also features an unrelated story called Idly Falling Feathers, featuring an identical girl named Mina at a magical university (no relation to Hogwarts, although it is housed in a Neuschwanstein-like castle) encountering another who has been unwillingly transformed into a gryphon. Only twelve IFF strips and three pieces of bonus art were posted, and the title is officially cancelled.

Another story, referred to as "GC", began in September 2016. This features Sara, who also looks a lot like Mina, arriving at a clinic as a care volunteer for a girl named Mary, who looks similar to Erin except for having lighter skin and green eyes - and for being a quadruple amputee. Five color pages had appeared as of mid-June 2017.

The comics updated at irregular intervals, with Idly Falling Feathers less frequent because it was in color. The artist has also reported wrist and shoulder problems, which obviously slow her drawing even further. In spite of this, AHS officially switched to color in late 2014, and since then has switched back and forth sporadically between color and black and white.

In July 2018 Drake wrote a piece on the site

expressing uncertainty as to her ability to continue, since when AHS has not updated.

The comics can be read here

. Warning: a few brief scenes in AHS are NSFW for nudity. Also note that as of August 2015 the links to Idly Falling Feathers have been moved to the Gallery section. A backup can be found here