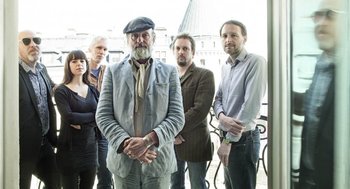 Current 93 is an experimental neofolk band that has been actively recording since 1982. At the helm is David Tibet (né Bunting), who was born in Malaysia from English parents and immigrated to England in his childhood. Originally releasing harrowing Industrial music, Tibet transitioned to a vein of Neofolk known as Apocalyptic Folk by 1988. He has worked with members of Death In June, Coil and Throbbing Gristle, as well as Thomas Ligotti, Tiny Tim and Shirley Collins. Steven Stapleton of Nurse with Wound was also a regular collaborator, appearing on nearly every Current 93 release until The New '10s, when his bandmate Andrew Liles stepped in (and Tibet also regularly appears on Nurse with Wound releases.) Recurring themes of his work include religion (primarily esoteric offshoots of Christianity), mythology, philosophy and nihilism.

He would later go on to say that he was only half-joking.