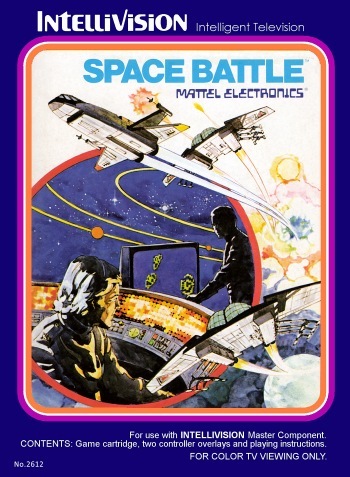 Space Battle is an Intellivision game published by Mattel Electronics, which was also ported to the Atari 2600 as Space Attack.

In this game, you control three fighter squadrons which you must deploy against five or six alien squadrons that are coming to attack your Mothership. The game alternates between the radar screen and the battle screen, where you control a gunsight which you use to fire your laser shots at the alien ships. Be careful not to let any of the alien squadrons get close to the Mothership, or else they'll start firing upon it and it will soon be game over.

A modified version of this game was used in the early 1980s as part of various TV stations' TV Powww game show, where the player by using the telephone simply had to shoot as many alien ships as possible before time ran out by saying "Pow!". It was later released as part of the multi-game Sharp Shot cartridge for the Intellivision as Space Gunner.