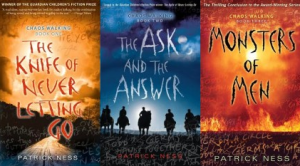 "The Noise is a man unfiltered, and without a filter, man is just chaos walking."
Advertisement:

Chaos Walking is the collective term for Patrick Ness's books The Knife of Never Letting Go (2008), The Ask and the Answer (2009), and Monsters of Men (2010). It is a series set on a dystopian Earth-like planet called New World, which human settlers from "Old World" colonised in the hope of starting a new life.

Todd Hewitt knows all too well the history of this plantation. Humanity quickly became engaged in a war with the local sentient species, the Spackle, who released germs that killed all of the women, half the men, and left every living, breathing thing that survived with a condition that causes their thoughts, fantasies, hopes and dreams to be broadcasted in a flood of information known as Noise. This Noise is an inescapable rush of pictures and words that you can't get away from, and it is ever-present and everywhere. Men, without comfort and with this newfound insanity, picked up a gun and ended the war.

Todd is the last boy in in Prentisstown, last settlement on the New World, sole surviving town of the war, largely because of its militaristic mayor. Though the war is over, humanity is far from saved — indeed, with no women to repopulate, humanity is going to die a slow death here, in this small place with a population of "146 men and one almost-man", Todd Hewitt is the only one who has yet to become a man. Men don't associate with boys, and so Todd is alone for the final month leading up to the important occasion, with only Manchee, the dog he never wanted, for company.

One day, while avoiding the Noise in the outskirts of town, he makes a discovery. An important discovery, something world changing, something that simply cannot be: silence—a hole in the Noise. In minutes, everything changes. The world he trusted is turned upside down, and he is forced out of his home to flee from Prentisstown with an army at his heels.

(another prequel, meant to be read after book 2), and "Snowscape"

All three books were shortlisted for the Carnegie Medal, with Monsters of Men winning it in 2011. It was also the second Young Adult novel ever to be shortlisted for the Arthur C. Clarke science fiction award. In late 2011, Lionsgate bought the rights to bring the trilogy to the big screen; the film adaptation was released in 2021.

Alternative Title(s): The Knife Of Never Letting Go, The Ask And The Answer, Monsters Of Men