Music / Out of Time 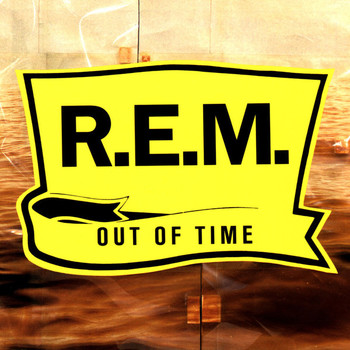 "That's me in the corner; that's me in the spotlight..."
Out of Time is the seventh album by R.E.M., released in 1991. Their second album released on Warner (Bros.) Records, it was their Breakthrough Hit, catapulting the Georgia Alternative Rock band from a cult hit to a household name worldwide. The success was not a complete surprise; their 1987 single "The One I Love" had already been their first to crack the mainstream music listening market, their shift to Warner Bros. in 1988 allowed Green to see much greater distribution both at home and abroad than the I.R.S.-era albums, and the band's massive 1989 world tour allowed them to build up an international fanbase as well as a domestic one. Everything had come together for R.E.M. over the past four years; it was Out of Time that served as the final catalyst.

The album stayed on the Billboard charts for 109 consecutive weeks, topping the charts twice during this time, and has sold over 18 million copies worldwide by the time of this writing. Out of Time also won the 1992 Grammy award for Best Alternative Album, with two more being picked up by "Losing My Religion" (Best Short Form Music Video and Best Pop Performance by a Duo or Group with Vocal).

Out of Time is most famously known for its lead single, "Losing My Religion", whose surprise success (peaking at No. 4 on the Billboard charts) can be considered in hindsight to be a precursor to the boom in popularity alternative rock as a whole would see later that year with Nirvana's "Smells Like Teen Spirit". The album's other most notable song, "Shiny Happy People", is best remembered for the band's sheer hatred of it.

Not to be confused with the 2003 thriller film starring Denzel Washington.

I meant to turn it off to say goodbye, to trope in quiet: