Music / Automatic for the People 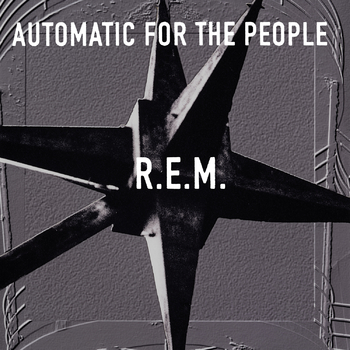 Now, Andy did you hear about this one?
Tell me, are you locked in the punch?
Andy are you goofing on Elvis?
Hey baby, are we losing touch?
—"Man on the Moon"
Advertisement:

Automatic for the People is the eighth studio album recorded by American Alternative Rock band R.E.M. It was released through Warner Bros. Records on October 5, 1992.

Starting production while Out of Time, their previous effort, shot up the charts, the band initially sought out a harder, more aggressive sound similar to that of their late 80s output as a means of offsetting Out of Time's Lighter and Softer approach, only to find themselves short on ideas. Consequently, at the suggestion of guitarist Peter Buck, they instead shifted towards a more acoustically-driven, melancholic sound featuring string arrangements by John Paul Jones: bleak in both sound and tone, the album ended up becoming the band's darkest, with lyrics focusing on themes of mourning, morality, loss, nostalgia, and depression, fueled by the members of R.E.M. approaching their 30s and consequently no longer being young adults.

On a somewhat darker note, this album is known for the fact that Kurt Cobain of Nirvana listened to it shortly before committing suicide in 1994, similarly to what Iggy Pop's The Idiot was to Joy Division frontman Ian Curtis back in 1980. Michael Stipe would later write "Let Me In" (off of the band's next album, Monster) in Cobain's memory.

Automatic for the People was backed by six singles: "Drive", "Man on the Moon", "The Sidewinder Sleeps Tonite", "Everybody Hurts", "Nightswimming", and "Find the River".

Every streetlight reveals the trope in reverse:

"...about an hour and a half ago. We've had no official explanation. Police estimate some three or four hundred people. They just...they just got out and walked. God... We've gotten confirmation, we cannot find anyone. I've never seen anything like this."