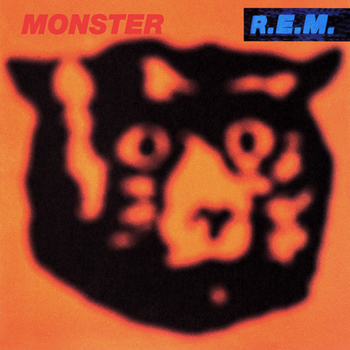 "I sequenced your arrival, I sealed your fate."
"...a 'rock' record, with the 'rock' in quotation marks."
— Guitarist Peter Buck's description of Monster
Advertisement:

Monster, released in 1994, is the ninth studio album by American Alternative Rock band R.E.M.. A radical and intentional stylistic departure from the poppy Out of Time and the acoustic Automatic for the People, the album instead presents a loud, distorted sound rooted strongly in the then-ongoing grunge boom as well as the British Glam Rock boom twenty years prior. The end result is far unlike any album R.E.M. had released before or since (with the possible exception of 2008's Accelerate).

Tying in with its more mainstream-friendly sound, the album is a scathing critique on the nature of celebrity, with lead singer and lyricist Michael Stipe adopting a variety of characters based around different facets of the life of an international superstar. Notably, the track "Let Me In" is a rumination on the suicide of Nirvana frontman Kurt Cobain, a friend of Stipe, earlier in the year; Stipe had previously attempted to convince Cobain to visit him in-person and collaborate as a means of breaking the Seattle singer out of the frame of mind that directly preceded his death, only for Cobain to cancel at the last minute. Regarding the album's sound, the music is intentionally rough and muddy, with loud, distorted mastering and Stipe's vocals buried in the mix (the latter being a technique previously used on R.E.M.'s earlier material).

The album was also supported by a lengthy world tour, the band's first since the Green tour in 1989. Bill Berry lobbied strongly for the tour to take place, having enjoyed the band's earlier tour and wanting to do it again now that enough time had passed for the band to recover from the previous experience; Berry was also the one who lobbied for the album's grungier sound, wanting the band to "rock." While the subsequent Monster tour went through relatively smoothly, the band briefly fell into a state of crisis when Berry suffered a brain aneurysm while on tour, only surviving thanks to it occurring within close vicinity to a well-known neurosurgeon in the area. Despite this, the band's memories of the tour are mostly positive, as clarified by Stipe and guitarist Peter Buck in a 2019 interview. A Concert Film from the tour, Road Movie, would be released in 1996. The band also wrote most of the material for their next album, 1996's New Adventures in Hi-Fi, while on tour, and performances of three of these songs would indeed be featured in Road Movie; New Adventures would be their last album with Berry, who would retire the following year partly due to health concerns spurred on by the aneurysm.

Monster spawned five singles: "What's the Frequency, Kenneth?", "Bang and Blame", "Strange Currencies", "Crush with Eyeliner", and "Tongue". The album is not to be confused with the KISS album of the same name.