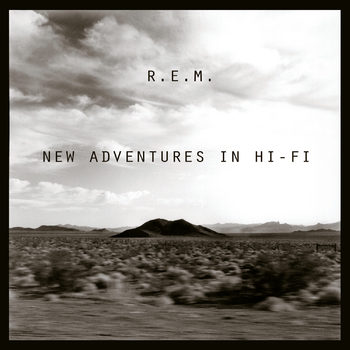 "I look up, and what do you see? All of you and all of me."
New Adventures in Hi-Fi, released in 1996, is the tenth studio album by American Alternative Rock band R.E.M.. Released in the wake of the backlash to their controversial grunge experiment Monster, the album presents a middle ground between the hard, distorted sound of its 1994 predecessor and the band's more traditional Jangle Pop. This compromise was largely the result of the album being written and recorded during the band's tour for Monster in 1995, with studio overdubs added later on. The decision to do this was influenced by the production processes for both Neil Young's Time Fades Away and Radiohead's The Bends; Radiohead were previously R.E.M.'s supporting act during the Monster tour. Also fitting the Young influences, the album incorporates elements of Alternative Country, paying homage to the band's southern background.
Advertisement:

New Adventures in Hi-Fi marked the End of an Era for R.E.M. in multiple ways. First and foremost, it was their last album with drummer Bill Berry, who amicably departed from the band and retired from the music industry altogether in October of 1997, shortly after sessions for their next album, Up, began. Berry's decision to retire was due to a combination of factors, namely health concerns caused by the near-fatal brain aneurysm he suffered on-stage during the Monster tour, burnout with performing and traveling, and a desire to start a new chapter in his life while he was still young enough to do so. He would ultimately become a hay farmer in his home state of Georgia, a profession he maintains to this day, only sporadically returning to the band for occasional one-off performances. Rather than see R.E.M. dissolve, Berry urged his former bandmates to continue as a trio; Up would ultimately be completed without Berry's involvement, and R.E.M. would utilize various session drummers in Berry's place before settling on Bill Rieflin as a de-facto replacement in 2003. However, they would officially remain a trio until their breakup in 2011.

Secondly, the album was the band's last collaboration with Scott Litt, who had been their main producer since Document in 1987; Litt decided to break off his professional relationship with R.E.M., also on amicable terms, to start his own record label, Outpost Recordsnote incidentally, the label was co-founded with Mark Williams, a former employee from R.E.M.'s previous label I.R.S. Records, onto whom they were still signed when they first began working with Litt, thus bringing things full circle. Thirdly, the album was the last the band made under the wing of longtime manager Jefferson Holt, who the band fired later that year following allegations that Holt had sexually harassed members of their support staff. Lastly, the album was the band's last on their original 5-record contract with Warner (Bros.) Records; they would sign onto a new 5-album deal shortly after for a reported $80 million, which rumors touted as the most expensive contract ever signed up to that point. Following this album, R.E.M. would be a very different entity in the years ahead.

New Adventures in Hi-Fi was supported by four singles: "E-Bow the Letter", "Bittersweet Me", "Electrolite", and "How the West Was Won and Where It Got Us".

Your tropes eclipsed the moon tonight: