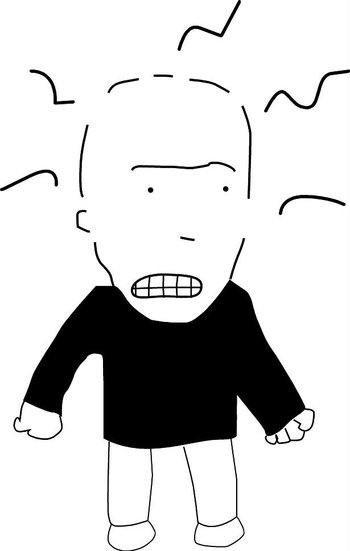 I DON'T LOVE YOU!!
Advertisement:

Migraine Boy is a comic strip made in The '90s created by American cartoonist Greg Fiering. It's a black and white six-panel strip about the aforementored "Migraine Boy", a Hair-Trigger Temper Deadpan Snarker boy who's always angry because of his consistent migraine, who has a neighbour who's always happy and try to befriend him, usually resulting in Migraine Boy killing him.

The publication was published originally in the Seattle-based Hype magazine, later being published in other famous magazines as Rolling Stone and Entertainment Weekly. The success of the strip was enough to be part of R.E.M.'s 1994 album Monster, with Fiering providing the album art and sticking Migrane Boy throughout the liner notes, and the comic later achieved popularity worldwide for a series of twelve 30-second animated bumpers for MTV, animated by studio GreenHead Media. The comic strip released two compilation books and an animated short in 3D was made in 2001 called The Bet

. Between 2006 and 2014, Fiering posted new Migraine Boy webcomics first on his personal website and later on the official "Migraine Boy and Pals" website.

In an interesting case, a Dark Parody was made in Chile at the start of the Turn of the Millennium in the form of Adobe Flash Web Animation, which used the MTV animation as base and made it Bloodier and Gorier and with a lot of Vulgar Humor and local Cluster F-Bomb, becoming a success in Chile at the point of overpassing the original animation. Until today, it's still considered a Cult Classic and a source of Memetic Mutation.

. Also in YouTube can be found the original MTV animation

as well the Chilean version

.note Don't worry, you don't need to understand Spanish to see all the Gorn and the Sex Comedy this animation has.

Look at those tropes, Migraine Boy!