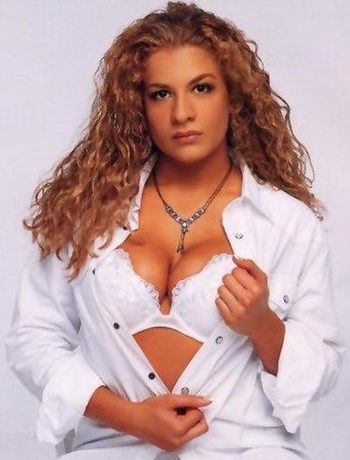 Nidia Lynnette Guenard (born March 12, 1979) is a former Professional Wrestler, valet and Diva for WWE from 2001-2004. She and Maven were the co-winners of the first season of WWE Tough Enough. She was assigned to the developmental promotion Ohio Valley Wrestling where she feuded with Victoria. She arrived on WWE SmackDown on June 6, 2002 where she confronted The Hurricane, her ex-boyfriend, setting up an attack by Jamie Noble. She was switched to WWE Raw in 2004 and stayed there until she was released in November. She also wrestled for IWA Puerto Rico, Mid-Atlantic Championship Wrestling, World Series Wrestling, Heartland Wrestling Association, Toryumon Mexico, and called it a career after losing a match to Miss Jackie (Gayda) at NWE (Nu-Wrestling Evolution in Italy) Destiny #5, December 17, 2005 (taped November 26th). She then retired to become a chef. Pro Wrestling Illustrated ranked her #3 for "Rookie of the Year" for 2002, behind Maven and Christopher Nowinski, and ahead of Taylor Matheny.

"These tropes are Tough Enough":