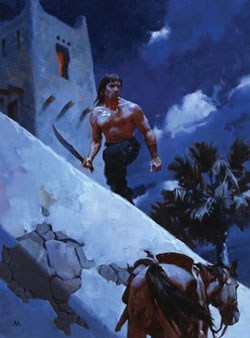 " (a.k.a. "Shadows in Zamboula") is a Conan the Barbarian story written by Robert E. Howard. First published in November, 1935.

Conan's travels bring him to Zamboula, a city-state heavily populated by a slave-caste of blacks from a specific region. Having wasted his money gambling, as usual, Conan prepares to retire for the night to a pre-rented room when a friend of his tries to warn him of the dark secret of the city; many of the black slaves of the city are members of the Darfar, a tribe that practices cannibalism in homage of dark gods, and because of their numbers, the townsfolk allow them to run rampant at night so long as they only prey upon beggars and travellers. Conan scorns this claim, and the rumors that the inn at which he stays makes extra money by selling travellers to the slaves for their cannibal banquets, but finds himself forced to believe when he is attacked in his bed by one of the slaves.

Slaying his assailant, Conan wanders out into the night, where he finds himself drawn to rescuing a woman who is being threatened by more cannibals. She gives her name as Zabibi, and begs Conan to aid her, using promises of gold and her body. Firstly, he catches and subdues her lover, who has been driven mad, then he goes with her to the Temple of Hanuman to retrieve an antidote to the "love potion" that rendered him this way.

There, he fights a holy strangler and kills the high priest to retrieve the antidote, only to learn that Zabibi hasn't been telling him the whole truth. Given gold as a reward, he leaves — though not before stealing a magical talisman from her, and murdering the innkeeper who almost got him killed.