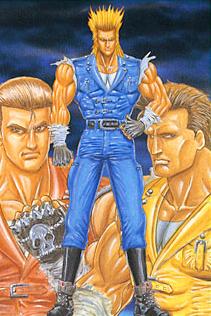 Berserker in the middle, with Blitz (left) and Bullova in the background.
"CYBORGS AIN'T LADIES!"
—From the print advertisement for the SNES version.
Advertisement:

Originally released for the arcades in 1990, The Combatribes was Technos Japan Corp.'s attempt to create another popular Beat 'em Up franchise following the success of their Kunio-kun (Renegade, River City Ransom) and Double Dragon games. It was developed by most of the same staff members who worked on the arcade version of the first Double Dragon and while it did not have the same widespread popularity as its predecessors, it did inspired a console port for the Super Nintendo Entertainment System released in 1992. The player chooses from one of the titular "Combatribes", a group of three former military men with superhuman strength who have come to New York City to rid the city of its various street gangs and criminal mobs.

The most distinguishing feature of Combatribes is the unique variety of moves available for each character. In addition to the standard repertoire of punches, kicks and running attacks, our heroes can also push away enemies, pick up and throw them, kick or jump over a fallen foe, bash their heads to the ground, or even swing one around by his feet. The player can even pick up two enemies from opposite directions and bash their heads together. There are also large objects the player can pick up and toss, such as parked motorcycles and go-karts, as well as pinball machines. Because of the lack health items and special moves, the game is also notoriously difficulty compared to other beat-'em-ups, as health recovery is only offered between stages.

The SNES version is a relatively faithful conversion, missing a few enemy characters, the throwable objects and a few areas. However, it does add cut-scenes between stages and boss fights that fleshes out the almost non-existent plot of the arcade version, as an optional versus mode that allows player to control any character from the main game.

The Combatribes provides example of: