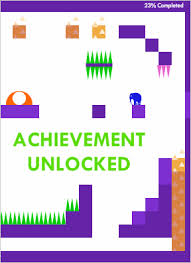 "Don't worry, metagaming is all that matters."
— Slogan for Achievement Unlocked
Advertisement:

is a web game by jmtb02, that could be considered a metagame about metagaming. It is the Spin-Off/sequel to Elephant Rave. The game features an elephant in a room, and myriad achievements ranging from simple things like moving left and right, to more complex things like dying a certain amount of times, or visiting certain points in the room in a certain order. You can earn 13 achievements by starting up the game and standing still.

Two subsequent sequels were made. The first of them, Achievement Unlocked 2

pokes fun at the concept of Downloadable Content. It also has a Time Trial challenge and a multiplayer mode. Achievement Unlocked 3

extends the amount of achivements to 400, includes a ladder system, and adds an Excuse Plot where you collect pellets for the Hamster King.

If you're here because you were actually looking for information regarding video game achievements, you're looking for Cosmetic Award and/or Achievement System.