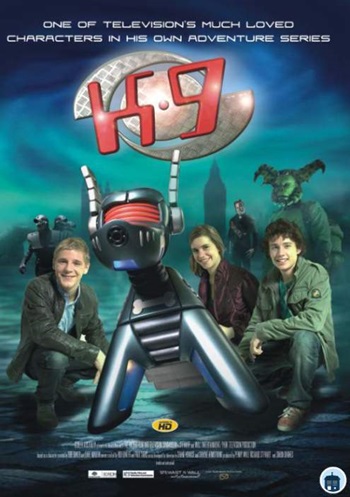 Who's a good dog?
Advertisement:

K9 (2009-2010) is a Doctor Who spin-off based on everyone's favourite robot dog, who fell through spacetime to end up in eccentric Professor Alistair Gryffen's laboratory/mansion in mid-21st-century London. Sacrificing himself to save the humans from something that followed him through the portal, K9 regenerates into an updated design... but with no memory of how he got to Gryffen's lab. He's quickly introduced to Gryffen, a physicist researching space-time manipulation (with an eye towards resurrecting his lost wife and children); Gryffen's petulant assistant, Darius Pike; rebellious middle-class scion Jorjie Turner (pronounced "Georgie"); and teen dissident Starkey, with whom K9 forms a bond.

26 episodes of the first series have long since aired, with no sign of a second season.

Though contemporary to both Torchwood and The Sarah Jane Adventures, this series was not as firmly tied to its parent show due to not being produced by the BBC.

K9 has examples of: