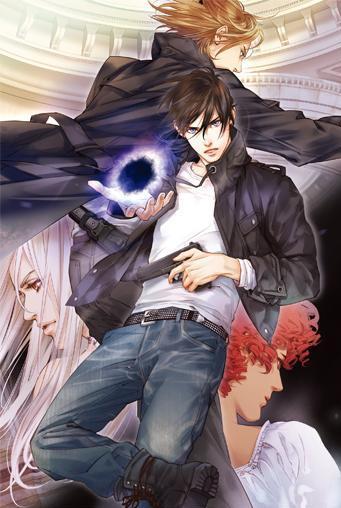 The Japanese cover of Madhouse, illustrated by Yuh Takashina as Kazusa.
Advertisement:

Cal Leandros is half-human, half evil elf. His mother was paid by the Auphe to produce a child, and that's all she did. He was raised by his Aloof Big Brother Niko (who was four years old when he was put in charge of him), and Niko has spent his entire life protecting his brother and becoming a badass. They've also been on the run. At age fourteen, the Auphe caught Cal. He came back two days later, two years older, with no memory of the Eldritch Abomination he'd seen.

Two years later, the guys have settled in New York City and made a few friends. But the Auphe aren't going to let Cal go...

Additionally, Thurman has self-published a number of short stories for the characters

"Rob" Thurman is a Moustache de Plume for Robyn, revealing her full first name only in the fourth book of the Cal Leandros series About the Author. She has also written the Trickster novels, Trick of the Light and The Grimrose Path, and the Korsak brothers' series Chimera and Basilisk,, as well as the non-speculative mystery novel, All Seeing Eye. The Trickster series is set in the same universe as the Cal Leandros stories and include Robin Goodfellow as a character.

Though Everwar was intended to be the last book in the series, it was cancelled without a word and the author vanished from social media without an update, leaving the series fate up in the in the air.