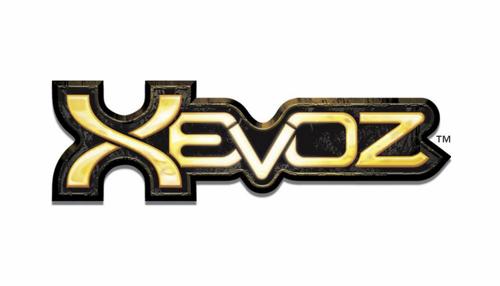 Originally designed as an amped-up take on the well-known Stikfas modular action-figure line, Xevoz utilises the ball-socket-jointing system that made Stikfas popular, this time using larger, sturdier and more unique parts to create distinctive characters (while in effect eschewing the generic elements that Stikfas was famous for.) This results in the notable blending of both the Standard Fantasy and Sci-Fi Settings by placing all these characters under six different races:

Towards the discontinuation of the toyline, a new two-pack introduced two new races to the mix:

Just like tabletop games, individual characters are never defined, only by race and class. The game involves a unique hexagonal die with interchangeable faces, each assigned to a weapon or feature of its own figure. Dice are rolled, damage is taken, and reflected by removing the right number of body parts until one side has been literally reduced to nothing. For added flavor, some figures include "gag parts" that deliberately fly in the face of the whole action-fantasy theme.

Despite (or possibly due to) the uniqueness of the action figure-tabletop game concept, declining sales of XEVOZ toys led to Hasbro discontinuing this line, and letting go the development team — but it lives on within its strong fandom, and even newer Hasbro productions like G.I. Joe: Sigma 6 and Transformers Animated utilise some design elements of this unique toyline.